If you're running FreeEMS on any engine whether it be in a vehicle or not, please post about it here!
Post Reply
10 posts • Page 1 of 1 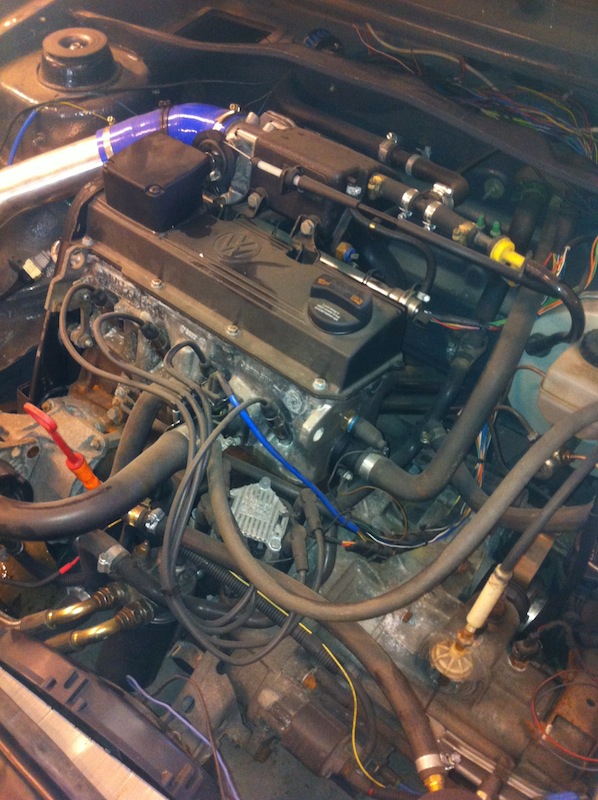 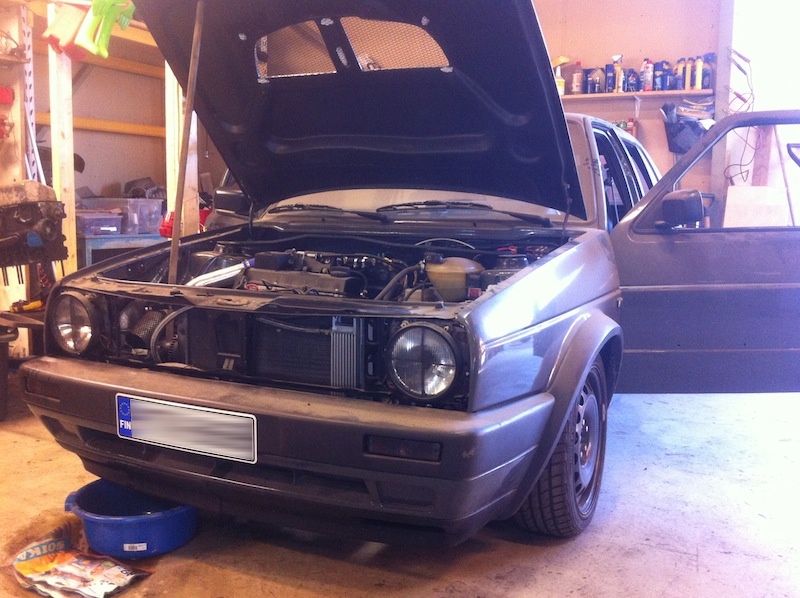 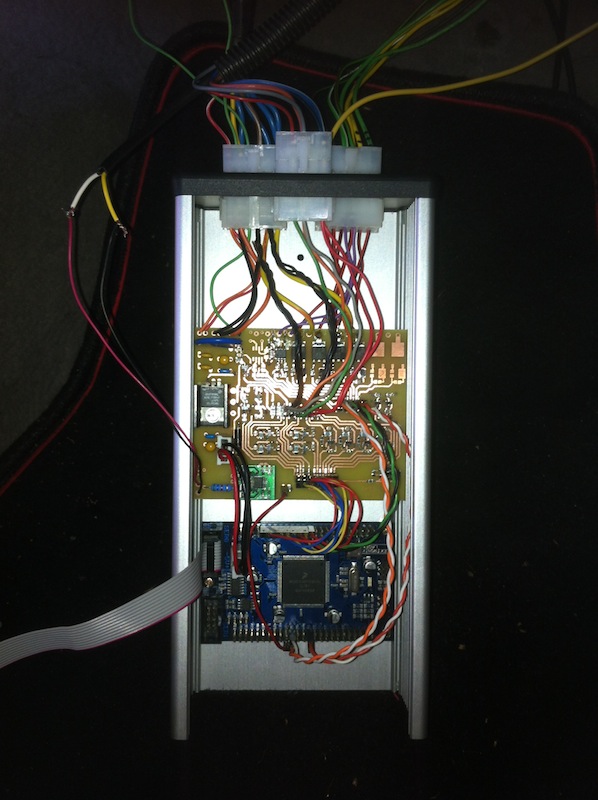 One oil hose blew earlier and tried to fix it prior to test the freeems. Fix == Duct tape == Fail.

Next the 60-2 decoder code needs some tweaking to get it revving and the DC motor operated throttle stop needs a H-bridge chip + software PID control...
Top

Congratulations Senor Cebolla! Nice work. Loving the home etch goodness. Insta-ban on some other forums I know of ;-)
DIYEFI.org - where Open Source means Open Source, and Free means Freedom
FreeEMS.org - the open source engine management system
FreeEMS dev diary and its comments thread and my turbo truck!
n00bs, do NOT PM or email tech questions! Use the forum!
The ever growing list of FreeEMS success stories!
Top

Nice looking board.
<@TekniQue> but in the end, it's code that makes a computer useful
Top

Nice. I want to run standalone management on my 1991 Polo GT which runs very similar digifant management to the golf gti. Following this thread.
Top

. Do you have the 1.3 engine in the polo? If I remember correctly the GT has a bit more power than the stock 1.3 that was used in golf (NZ engine)? The golf version is called Digijet but is indeed similar to Digifant. Not sure if polo has the same?

My engine actually has the head, intake and all injection parts from a later mk3 golf GTI. This is called the simos injection. The mk3 also had the digifant but they which it half way like 94->. The simos is sequential as the digifant is batch injected.

There are few things you should check from your engine. If I recall correctly the digijet had standard 60mm injectors? This is a good thing as the other digifant systems have these stupid injectors that are kind of integrated into the fuelrail and have a shared 2-pin connector at the other end to fire them all at once.

Also check that you have a TPS sensor in your throttle body as early digijet/digifant systems had only switches for closed and wot.

For a trigger I suggest you ditch the distributor or make a custom wheel for it. Also I think the dizzy had a vacuum control so is not solid and the spark uses a "smart" ignitor. The crank has no sensors so you could make a custom triggerwheel to it as I did:

There is also an easy way and I think it should fit your engine. The later small VW engines use this crank oilseal flange that has a built in trigger wheel + sensor:

Only downside is that its located in the clutch end of the engine. So if the wheel slips or moves for some reason you have to take the tranny out to access it. It should be ok as its used as oem and have only heard this happen once. With this wheel you can use semi-seq + wasted spark without the dizzy. You could also make it sequential by adding a custom sync wheel into the dizzy and lock it from the vacuum.

Just some thoughts and I sure can help you if you decide to make yours standalone.
Top

What are you talking about? Your fearless leader is a hard core air cooled fan from way back :-p

That slip fit sensor looks like a terrible idea. You couldn't pay me to use that. I'm shocked that they put it on cars :-/

What's in the stock dizzy as is? Maybe it's usable as is? We want more stock stuff running if possible/interesting. Toothed wheels are boring, but useful.

Fred.
DIYEFI.org - where Open Source means Open Source, and Free means Freedom
FreeEMS.org - the open source engine management system
FreeEMS dev diary and its comments thread and my turbo truck!
n00bs, do NOT PM or email tech questions! Use the forum!
The ever growing list of FreeEMS success stories!
Top

Wow thanks for the in depth reply.

I was wondering what intake you were running as I didnt recognize it.

Its definitly digifant, runs a tps instead of switches and the dizzy is not vac advance but not sure if it is mechanical advance, i doubt it as ecu controls the advance so most likely just a trigger wheel.

It has standard bosch injectors which are all connected via the loom with a 3 pin plug at the end but 1 pin is for the idle air valve.

Great idea with the later crank seal may have to do that at some point.

I have a spare ecu which is intermittently faulty so ideally I would salvage the case and plug to use the standard wiring loom and keep it looking very oem.

I am keen to run ITB's on standard management with the AFM (AFM from mk2 golf gti)for now. I have found that old bmw k100 motorbikes run bosch motronic with an afm and ITB's. It hopefully should be fairly plug and play as the plenum looks well designed and has long velocity stacks in it so should not be too much difference in length to the gt manifold. As it stands I think with the current engine hardware should be a good starting point but I'm new to this stand alone/diy approach and there is so much info floating around on this site im unsure where to start with actually building an ecu.
Top

Fearless Leader wrote:What are you talking about? Your fearless leader is a hard core air cooled fan from way back :-p

Of course you are

. But more the merrier, both air and water. Was it Matthieu (flat4power) that was also an aircooled dude? So we definately need more water VW guys


Fred wrote:What's in the stock dizzy as is?

Probably bare minimum to work as a batch injection. This is a later type digifant system though so not sure. My -92 digifant dizzy had only four equally sized windows for the hall and thats it.


petegt wrote:Great idea with the later crank seal may have to do that at some point.

Well, as you see Fred didn't quite like it

. But, its there if needed. I myself had mixed feelings about it and was about to get one. But I had couple of 60-2 wheels already so decided to machine an adapter for one and attach to the belt pulley.


petegt wrote:I am keen to run ITB's on standard management with the AFM

If you go standalone you have few options with the ITBs. Getting a good vacuum for a map sensor might be troublesome so one option could be to use alpha-n (tps as load) or a blend of those two. Or maybe a later type maf sensor. Others can give more insight on these as I have never run ITBs myself.


petegt wrote:im unsure where to start with actually building an ecu

There are options and depends how much your willing to do. You can take the same path as I have and use a CPU module and have separate electronics for input and output. Anyway I recommend and maybe the best way is to get your hands on a jaguar board made by Andy (DeuceEFI). That has basically all you need and can maybe fit into your oem ecu case.
Top

Thanks for the advice